Welcome to our fifth virtual journey.  These are based on some of our favourite itineraries; designed to inspire, guide and delight you in your daydreams for travels to come.  We’ll showcase some captivating destinations alongside mouth-watering recipes, cocktails, book, TV, film and music recommendations all designed to bring the trip alive from the comfort of your own home.

It’s week five and we are taking you on an action-packed Croatian adventure, the perfect mix of adrenaline-filled activity and ultimate luxury against a backdrop of the beautiful Dalmatian coast. You’ll spend time in Split, Hvar and Korcula, where you will go canyoning, hiking, biking, zip-lining and rafting, all the while discovering secret waterfalls, winding rivers and idyllic villages. You’ll stay in some of the country’s best hotels as well as getting a taste of island hopping as you cruise between each location onboard a luxury motor yacht through glittering archipelagos. You’ll end up in the awe-inspiring UNESCO site of Dubrovnik where the escapades continue in and around the historic city walls.

You can find more information here

Your second destination is Hvar where you will stay at one of Hvar’s coolest properties, Hotel Adriana, perched on the waterfront overlooking the fishing harbour just a short stroll from the main square. Housed in a 1970s building, the interiors juxtapose the hotel’s heritage in their modern, minimalist style. The highlight has to be the incredible spa spanning three levels, complete with a seawater rooftop pool - the ideal place to unwind after a day exploring. Make sure you try a classic pašticada during your stay, popular in Dalmatia, this peasant dish is widely prepared for feasts at celebrations and served in every traditional restaurant in Hvar.

Your final stop is Hotel Excelsior Dubrovnik, an iconic property built into the hillside above the deep blue Adriatic sea. An eclectic combination of past and present, the hotel is made up of two parts, the historic villa dating back to 1913 and a modern glass tower built in the late 20th century and the design is contemporary and stylish. Not only is there an indoor pool but guests can wander down directly from the hotel to the stone-paved sea terrace with sunbeds and steps into the water for swimming. Sweeping views over the ocean to the walls of Old Dubrovnik capture the magic of this medieval town. For dinner, why not try a classic dish from southern Croatia, Buzara.

Game of Thrones - TV
Some of the most popular episodes of 'Game of Thrones', one of the best loved TV series in history, were shot in Croatia. The medieval heritage and stunning Adriatic scenery serve as the backdrop in the second season in particular, where the old walled city of Dubrovnik doubled for the fictional city of King's Landing. Filming also occurred in the coastal towns of Split, Imotski, Mosor, Šibenik and Baška Voda.

Mamma Mia! Here We Go Again – Film
The romantic musical comedy and sequel to Abba movie 'Mamma Mia!' was filmed on Croatia's tiny island of Vis and it's easy to see why. Scenes are filled with shots of the rugged cliffs, untouched landscape, beautiful beaches, 17th century architecture and authentic seafood restaurants, capturing the low-key and unpretentious feel of Kalokairi – the fictional Greek Island that is the setting of the film.

The Border Post – Film
Yugoslavian soldier Pasic, frustrated by life and frequently drunk, is stationed on Yugoslav-Albanian border in 1987 when he suddenly feels a sharp pain in his groin. He consults Sinisia, the only doctor among the soldiers who identifies his condition as syphilis. Having seemingly contracted the sexually transmitted disease from a local prostitute, Pasic is desperate for his wife not to discover the truth, so in an effort to avoid going home he declares a false state of emergency, claiming knowledge of an impending attack from the Albanian army, forcing all Yugoslavian soldiers to remain on guard. The joke results in hysteria as the troops dig trenches and prepare for battle, and Pasic's world slowly unravels.

Chasing a Croatian Girl by Cody McClain Brown
American author Cody McClain Brown tells his own story through humorous and astute anecdotes of falling in love with a mysterious Croatian girl, and his subsequent relocation to Split. What follows is an earnest and insightful portrayal of the heart of Croatia: the importance of tight-knit Croatian families with loving matriarchs at the helm, peculiar coffee rituals, inexplicable drafts behind every window and all of the other charming idiosyncrasies of his new home. A heartwarming love story about coming to terms with cultural differences.

Our Man in Iraq by Robert Perišić
Set in Zagreb during 2003, Our Man in Iraq tells the tale of self-assured journalist Toni and his troubles balancing his nagging mother, tenuous career, headstrong girlfriend and requests from rural family members for work. During a moment of weakness, he puts forward his unhinged cousin, Boris, to cover the Iraq War for his newspaper. Boris's reports become increasingly incoherent so Toni covertly rewrites them until one day they stop altogether and Boris goes missing. Toni's sense of reality spirals as he tries to keep the disappearance secret and hide from the truth, whilst keeping on top of his own personal challenges in a country that is concurrently self-consciously moving from socialism to global capitalism.

Girl at War by Sara Novic
The story begins in Zagreb in 1991 as happy-go-lucky ten year old Ana Jurić's life is torn apart as civil war breaks out across Yugoslavia. Her carefree childhood running around with her best friend Luka, caring for her baby sister and going to school is no longer and Ana is lost to a world of air raid drills, gunfire, rationing, and guerrilla warfare. The novel moves between 1991 and 2001, where Ana is a college student in New York, haunted by her past and hiding the truth from herself and everyone around her. In the hope of coming to terms with the impact the war has had on her, Ana returns to Croatia to face the events that disrupted her once happy upbringing.

Klapa Šufit, Ne Diraj Moju Ljubav
Klapa Šufit is a male singing group from Croatia who perform klapa music, traditional a capella singing that hails from Dalmatia and is a huge part of southern Croatia's heritage. 'Klapa' means 'a group of friends' and the music celebrates love, life and the environment through harmony, melody and rhythm. The cultural importance of klapa was formally recognised in 2012 when it was inscribed on UNESCO’s Representative List of the Intangible Cultural Heritage of Humanity.

2CELLOS, Score
Croatian cellist duo 2Cellos is made up of classically trained Luka Šulić and Stjepan Hauser who break boundaries creating orchestral re imaginings of popular pop songs, rock music and film soundtracks on these classical instruments. They were discovered when their YouTube video of their version of Michael Jackson's 'Smooth Criminal' went viral in 2011 resulting in Sony Masterworks offering them a record deal and Elton John inviting them to join him on his global tour. The album Score features songs from well-known movies and TV Shows reborn with 2Cellos' classical twist.

Josipa Lisac, Dnevnik Jedne Ljubavi
Josipa Lisac is one of Croatia's most iconic artists, fomerly a vocalist in the group Zlatni Akordi in the 60s, she went on to record her first solo album in 1973 and has since had huge success as a highly acclaimed singer in Croatia. She's known for her distinct vocal range from contralto to soprano, experimenting with different genres and styles of music and her vibrant stage presence. Dnevnik Jedne Ljubavi was her first ever album and still considered to be one of her greatest.

Travel may be on pause for now so whilst the activities and adventure Croatia has to offer are something to be planned ahead of the world opening up again, the country is also rich with cultural institutions and events that we can take you to from the comfort of your home. We have prepared a list of museums in Croatia that have prepared virtual walks through corridors full of cultural treasures: 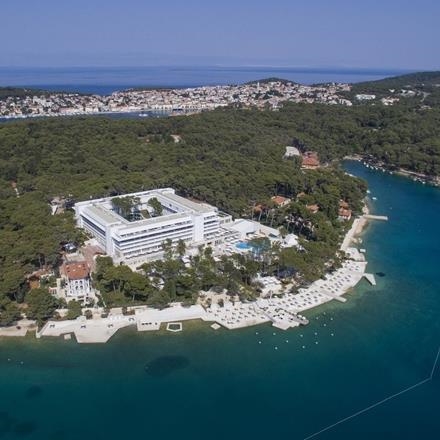 The iconic Hotel Bellevue is a boutique hotel that has been re-imagined providing a fresh take. Having undergone major ...